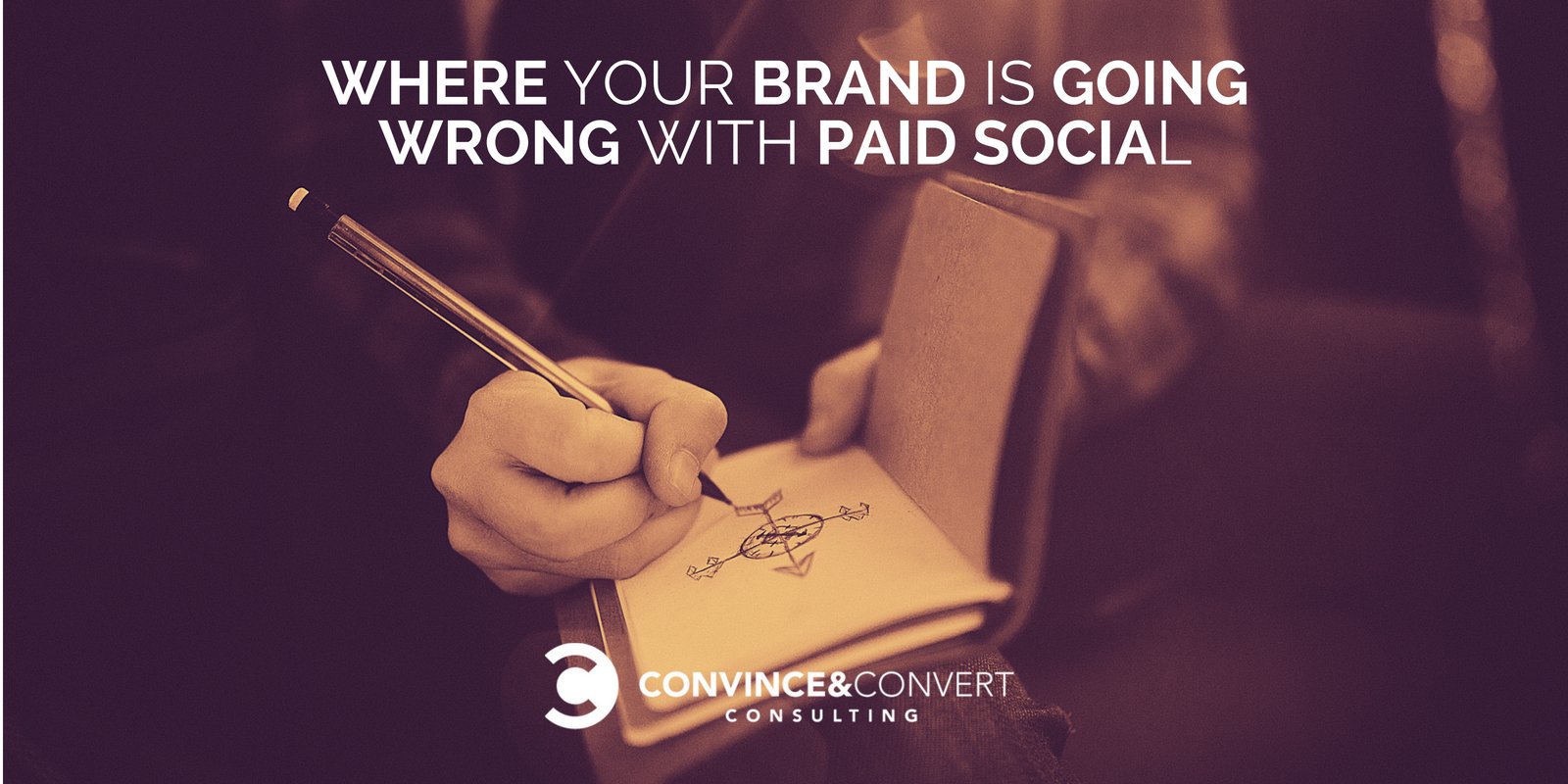 Like paid search before it, paid social has become a hotspot of competition within the digital marketing world. More and more, people are looking to it to diversify their ad spending. It’s an arena rich with opportunity, but also with plenty of room for error.

We all know that the only constant with social platforms is change; you simply cannot build your brand effectively via paid social advertising if you’re not continuously examining, learning, and refining your approach. Pattern89’s recent webinar on the Anatomy of A Social Ad is full of gems about how to do just that.

Pattern89 has created an impressive data co-op consisting of information from hundreds of top brands that use a cutting-edge machine learning platform to analyze and predict ad performance. It looks at over 2,400 attributes of an ad, from the creative itself to audience targeting, audience saturation, and more.

Their ultimate goal is not just to answer WHAT is happening, but WHY it’s happening. This webinar is based on the data gleaned from studying the co-op’s Facebook and Instagram paid social advertisements in 2017.

Conversion is the name of the game, right? Everyone’s boss wants to see the hard numbers on how many purchases were made in response to a particular ad buy. But you might be missing the forest for the trees if you assume that’s the only way to approach paid social.

Looking at ads by objective, 72% of the ads in Pattern89’s data set from 2017 were focused on conversion. Only 10% were focused on awareness and a mere 17% have a goal of consideration. The imbalance is striking.

In order to secure and maintain conversion rates, you must also focus on building awareness and consideration into your sales funnel. Doing so will drive traffic and engagement that will help you retarget and convert users throughout the buying cycle, giving you an exponentially stronger return on your ad spend!

In order to secure and maintain conversion rates, you must also focus on building awareness and consideration into your sales funnel.
Click To Tweet

And there are opportunities for capitalizing on paid social through the funnel. The key is to make sure the ads you’re serving up are finding the right audience at the right time, whether they’re just thinking about buying, shopping for options, or are ready to pull the trigger. 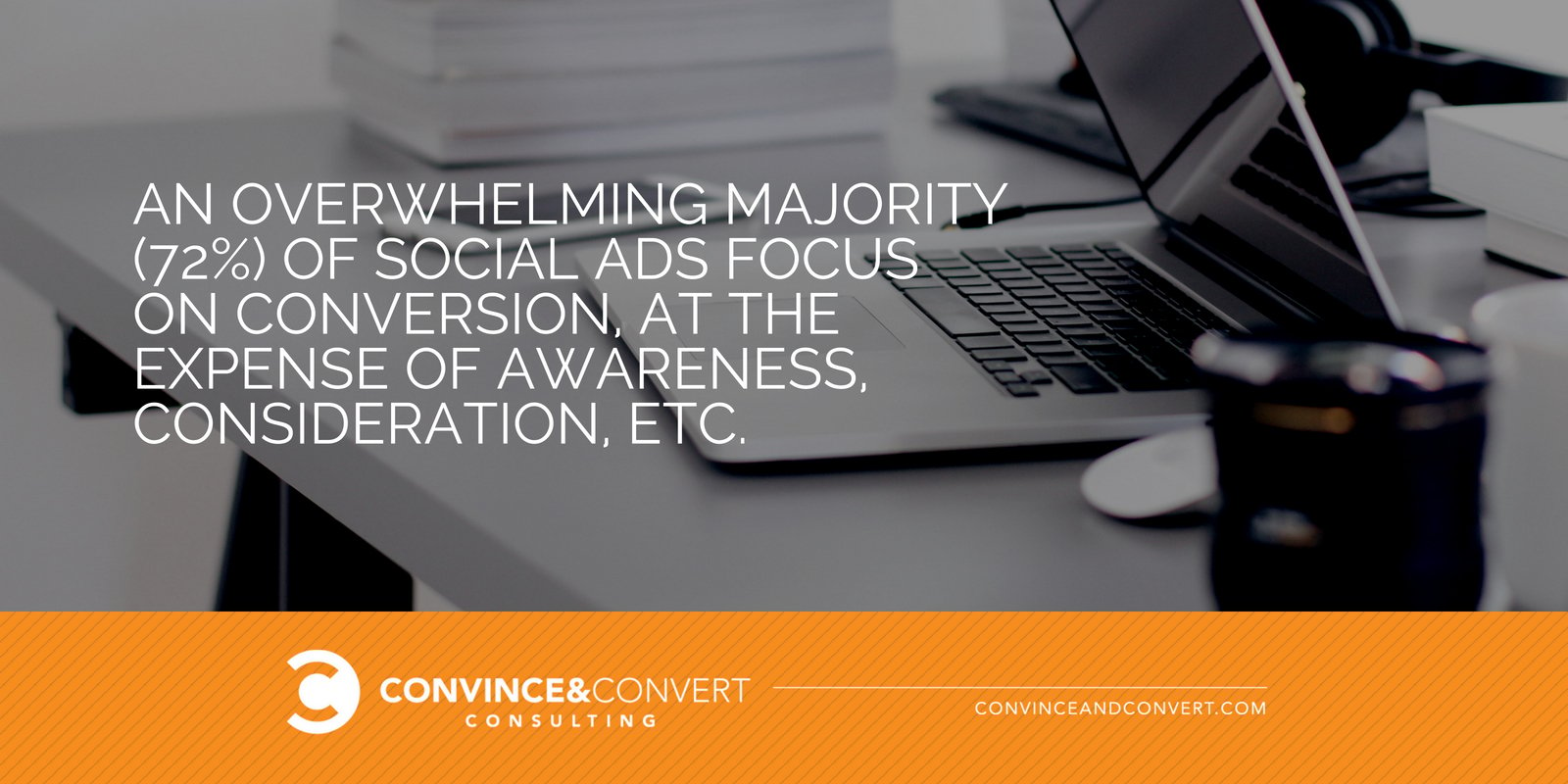 Looking at 2017 ad trends, Pattern89 confirmed that the strongest common factor amongst top advertisers—that is, those who are getting the highest return on their ad spend—is that they are testing FIVE TIMES the creative of the average account.

If you want to take your brand to the next level, testing and honing your creative approach is a surefire way to do that. There are four major areas of creative focus they identified that are ripe for the picking in 2018:

I know, I know. It’s been said approximately two million times: video is the future. Every single source (from media to the social platforms themselves) report that video is consistently outperforming every other type of content on social channels. And yet, there is still a massive gap between what is and what should be. Image is still the dominant format for pretty much every marketer.

It can feel nerve-wracking to make the investment and navigate the challenges of fitting video into your ad program, but the competition is so slim that there exists practically endless opportunity! On Facebook in 2017, 93.4% of posts were image-based, versus just 6.6% video-based. On Instagram, that same number is 91.5% to 8.5%. Get in while the getting’s good!

It may seem silly, but it’s true: according to Pattern89’s co-op data, ads with emojis universally perform better than those without. Looking at ads with conversion as their main objective, there was a significant difference on the return for ad spend for those ads featuring emojis: Facebook showed a 9 to 1 vs. 7 to 1 ratio and Instagram came in at 8 to 1 vs. 6 to 1.

What was the most popular emoji of 2017? Coffee! Followed closely by the surprise face and the sunglasses face. They recommend experimenting with emojis that feel natural and organic to your brand to see what, if anything, strikes a chord with your audience.

A few little words can make a world of difference! For example, co-op data showed the difference between using the phrases “Shop Now” and “Learn More” for conversion objectives to have a major effect on return for ad spend.

On Facebook, “Shop Now” came in at 15 to1 vs. 6 to 1 for “Learn More” and on Instagram, those same numbers were 11.4 to 1 to 5.6 to 1. So think about what kind of call to action you’re using and play around with phrasing to ensure that you’re optimizing each and every paid social ad for top-notch performance.

This may not be something you’ve considered before, because as marketers we always want to approach ad creation with an enthusiastically positive perspective on our product or brand. But the data shows that it’s actually a neutral sentiment that is smashing the competition (both positive and negative) in paid social ads, regardless of whether the ultimate objective of the ad is awareness, consideration, or conversion.

At every level of the funnel, it seems that consumers are responding most to those messages that simply give them information in a way that allows them the freedom to form their own positive or negative sentiment, rather than those which are overtly positive (or negative). Experimenting with a more neutral tone may be a key to boosting your engagement.

This is just the tip of the iceberg when it comes to how you can use social ad data to analyze your brand’s performance and rework your ad program for optimal success. To learn more about maximizing your paid social advertising at every level of the funnel, check out Pattern89’s new webinar. You can also request a demo to see how their bulletproof process and unique blend of human and artificial intelligence can help take your brand to the next level.