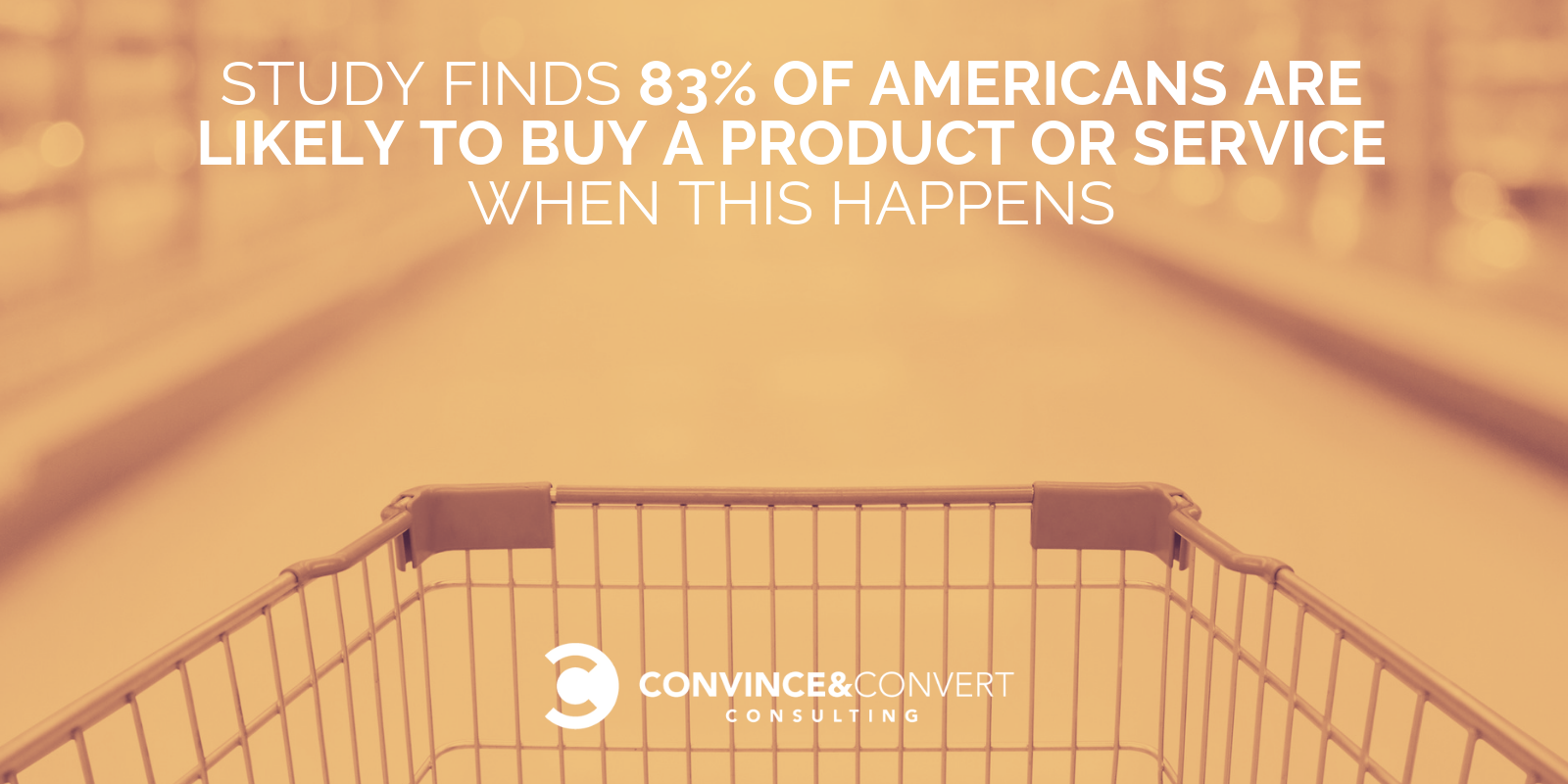 Now the number 83 takes on new significance, at least for marketers. We’ve been working on some exciting brand-new research at Convince and Convert to better understand the importance and value of word-of-mouth marketing. Our newly-released report, Chatter Matters, found that on the whole, word-of-mouth is more powerful than has been previously documented. That’s where the number 83 comes in. According to Chatter Matters, 83% of Americans are more interested in purchasing a product or service when they’ve received a verbal recommendation from a friend or family member.

83% of Americans are more interested in purchasing a product or service when they’ve received a verbal recommendation from a friend or family member. #ChatterMatters
Click To Tweet

Let that sink in: 83% of us are influenced by what our friends and family tell us because we trust them. Not only is word-of-mouth a powerful motivator, but it’s actually the way we prefer to get information when making purchase decisions. Among all Americans aged 13 and older, word-of-mouth represents two of our three most popular sources of information. The third? Online research, which in many instances like ratings and reviews is another form of word-of-mouth.

Among all Americans aged 13 or older, word-of-mouth represents two of our three most popular sources of information. #ChatterMatters
Click To Tweet 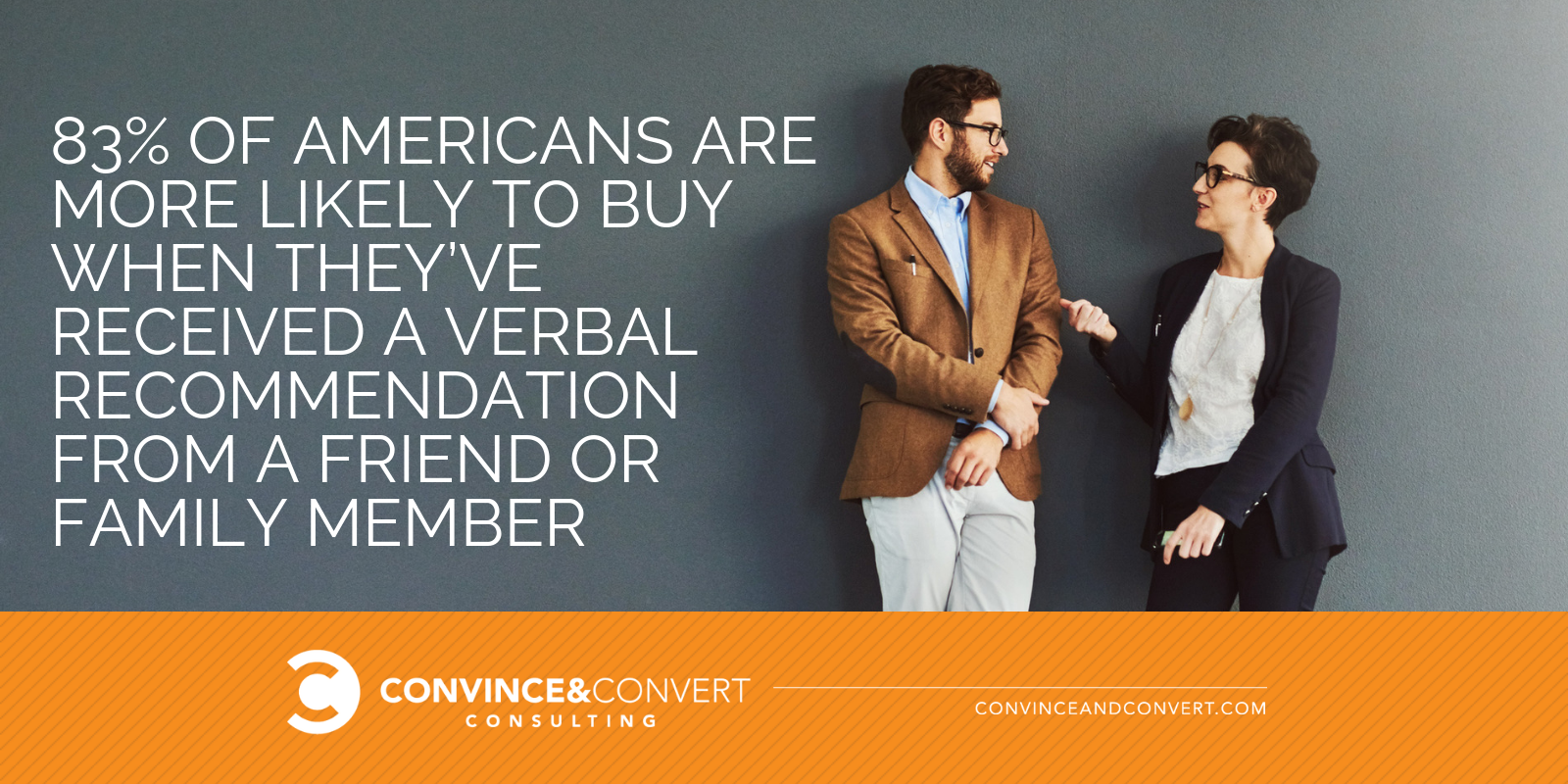 When It Comes to Word-of-Mouth, Being Good Isn’t Enough

All marketers care about word-of-mouth—online and offline. It is the oldest form of customer acquisition and perhaps the most cost-effective. We mistakenly assume word-of-mouth will take care of itself and that our customers will talk about us.

But we rarely give them a strong narrative hook to do so. Instead, we assume that being good gets us a story.

We assume if we have good food, we’ll get a good story.

We assume if we have good customer service, we’ll get a good story.

We assume if we’re a good company, we’ll get a good story.

Most people don’t tell each other about their perfectly adequate experiences with businesses. They tell them about the experiences that are memorable, interesting or outstanding. That’s the tipping point for word-of-mouth: It’s about creating an experience that is actually worth talking about.

Consider Uber Conference, a cloud-based conferencing system. For those of you who haven’t used Uber Conference, they have terrific hold music you get to listen to during those inevitable minutes spent waiting for everyone to attend your meeting. At first, the music seems catchy enough, but then when you listen to the lyrics, you realize it’s unique and truly original. (You can listen to the hold music here.)

The song was written by Uber Conference’s co-founder and creative director, Alex Cornell. I’m not saying the song is Grammy worthy (although it’s very good), but it has been worthy of a lot of online conversation. It is a narrative hook people can use to talk about Uber Conference, and that’s exactly what happens.

The hold music on an @uberconference before anyone else joins is hysterically funny!

Old is New Again, But This Time It’s Nuanced

Word-of-mouth seems simple enough, but it is as nuanced as any marketing discipline. In Chatter Matters, we saw variances in its importance across age (spoiler alert: Millennials really value word-of-mouth), gender (women respond to offline word-of-mouth more than men) and ethnicity (Caucasians are more influenced by word-of-mouth than non-Caucasians).

When forced to select just one source of information to rely upon when making purchases, half of Americans would select online or offline word-of-mouth.

So, there you have it. I hope you’ll take the time to read the entire Chatter Matters report and to seriously think about how you can take advantage of the fact that 83% of us are influenced by our friends and family’s recommendations. Watch out Bismuth. 83 just took on a whole new meaning.

Chatter Matters is a proprietary word-of-mouth report produced by Convince & Convert Consulting and the research firm, Audience Audit. It examines the word-of-mouth attitudes of 1,001 randomly selected Americans. The margin of error is approximately +/- 3.1%. Chatter Matters is a companion piece to the new book, Talk Triggers: The Complete Guide to Creating Customers with Word-of-Mouth. Talk Triggers was co-authored by Jay Baer and Daniel Lemin. It will be released by Penguin Portfolio on October 3.